How to Donate Plasma and Find a Plasma Bank Near You

Right before I graduated from college, I realized that soon, I’d be completely responsible for paying my own expenses.

I had an unpaid internship booked for the summer after graduation, and my parents made it clear I’d have to pay the rent myself.

Immediately I started thinking about ways to make more money. I was still taking a full course load, writing for the school paper, and sending out job applications. I was also spending time with my girlfriend since I wasn’t sure if we’d end up doing long distance after college.

I didn’t have a lot of extra time on my hands, so a second job was out of the question. That’s when I discovered selling plasma.

It sounded too good to be true. You could get paid $20 per session, do it multiple times a week, and read or be on your phone while you waited for the process to finish.

Selling plasma kept me going, financially, through that semester and summer. I didn’t make a ton of money, but it was enough to buy groceries for a week or fill my gas tank. Plus, I could make appointments around my busy schedule.

How Much is Plasma Worth?

Every plasma center has its own payment schedule, and pay can vary even within the same chain. In general, donors can earn between $20 to $50 per visit.

If you have several plasma centers near you, call them and ask what their base rate is per repeat visit. There may be a $10 discrepancy in how much they pay, which can add up over time.

New donors can sometimes be eligible for bonuses if they donate a certain amount in a certain period of time. For example, Octapharma Plasma pays an extra $400 for new donors. The requirements may vary based on location.

The FDA limits donations to two in a week and two days apart. If you donated on a Monday, you can’t donate on a Tuesday. You have to wait until Wednesday. This lets your body replenish itself with plasma.

Most plasma centers give you a prepaid card that is loaded with money after every donation visit. If you earn an extra bonus, it’ll go on the card, too. You can use the card just like a debit or credit card, both online or in person.

There’s no waiting to reach a certain minimum to cash out. If you go once, donate, and don’t come back again, you’ll still get paid. This is one reason why donating plasma can be more reliable than other side hustles. If you need money today and qualify as a donor, you can get it.

Plasma Donation Centers Near Me

You probably have several plasma donation centers near you, especially if you live in a major city. Before you start donating, see which one pays more and offers more bonuses.

You generally have to pick one location and stick with it. Some places won’t let you donate to multiple chains, so make sure you’re donating to the high-paying center near you.

Remember that every location can have its own pay rates. For example, if your cousin donates plasma in New York, they may get paid more than if you live in Alabama. 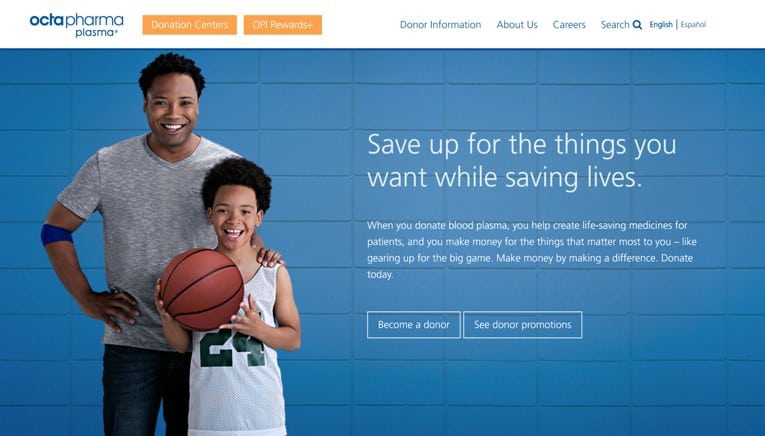 Octapharma Plasma is one of the most prominent plasma donation chains with locations in all parts of the country, including the South, Midwest, Northeast, and West. Whether you live in Arizona or Arkansas, you might have an Octapharma Plasma near you.

DonatingPlasma compiles plasma donation centers from around the world. Most of their U.S.-based locations focus on the Midwest, South, and East Coast, although there are locations in the West.

CSL Plasma is another major plasma bank center with locations in states like California, Illinois, Texas, and Rhode Island. CSL claims you can earn $400 a month with them. 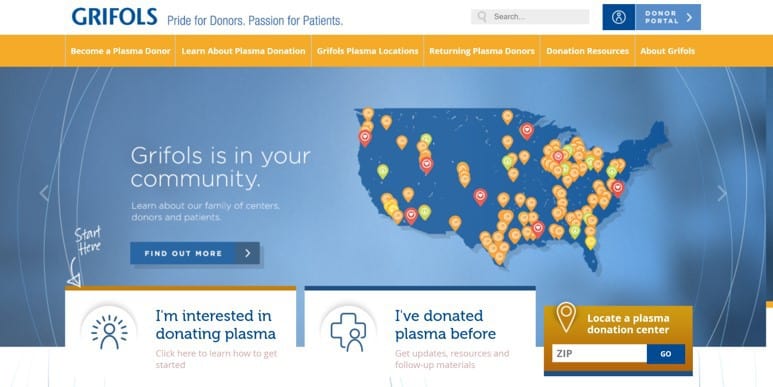 Grifols Plasma has many plasma centers in states like Georgia, Utah, Virginia and more. Some locations offer a referral bonus if you bring a friend who then successfully donates.

Related: One Expert’s Advice on Why Weird Side Hustles Work (and How to Find One)

Plasma Donation Requirements: How to Qualify to Sell Plasma

Think of donating plasma as a job interview, and one that you’ll repeat every time you go in.

For instance, each time you go to donate, they’ll test your protein levels and will ask you to fill out a short medical questionnaire. Just because you qualified last week doesn’t guarantee you’ll be eligible this week.

You have to be at least 18 years old to donate plasma. If you’re healthy and have a car, this may be an easy way to make money because you can bring a book or tablet with you while you wait.

Each facility can make its own rules, and some limit how old you can be to sell plasma. Some may cap it at 69 years old. If you’re a senior, call before going to a plasma center.

The first appointment is the most intense. You’ll need to bring:

For every appointment, make sure to bring your ID to verify your identity. You should also dress warmly because the donation rooms are often cold. Some people bring blankets or wear layers.

Because the process takes between 60 to 90 minutes, it’s good to bring a book, phone, tablet or even a laptop. I used to bring in my laptop to do homework while I waited. It can be distracting to do work, but watching a movie or listening to a podcast is doable.

If you get lightheaded after donating plasma, bring a light snack like orange juice or almonds to eat before you go home.

Related: 13 Easy Side Hustle Apps to Make Money in Your Spare Time

People need to weigh at least 110 pounds to qualify for plasma donation. If you weigh less, your body may have a bad reaction. Some centers may pay people differently based on their weight.

Plasma centers have a rigorous health testing system. Before you donate, you’ll have to fill out a complete medical history and have your blood tested.

Most plasma banks test for syphilis, hepatitis A, B, and C, and HIV. This ensures the plasma isn’t contaminated before it goes off to its final location.

People who donate or sell plasma should have a good diet because that can affect their protein levels. If you already eat protein a couple of times a day, your levels will probably be fine. People who exercise regularly may want to up their protein intake.

But if you don’t get enough, consider adding in some eggs, chicken, or other lean protein sources to your diet. Protein powder usually contains 25 grams of protein per scoop, making it an easy and affordable way to increase your protein without eating a big steak.

How to Prepare for Selling Plasma 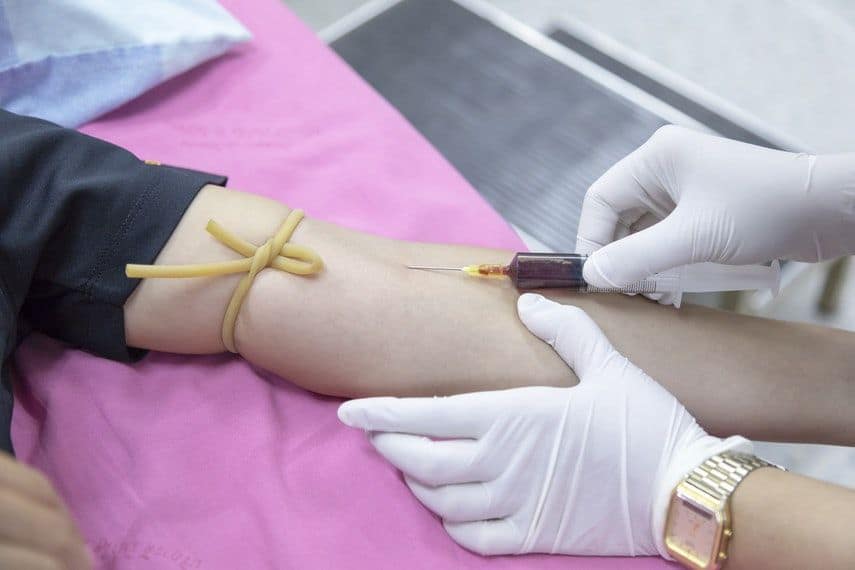 Even though selling plasma is an easy side hustle, there are steps to take to ensure you’ll be approved to donate.

Get a good night’s sleep

How much you sleep can affect your plasma totals. Having healthy, regular sleep patterns increases the chance that your levels will be good enough for plasma donation.

Drink extra water before the appointment

Giving plasma has a dehydrating effect on the body, so drinking water before the appointment can ensure you don’t feel bad after you leave.

Eating beforehand can help you avoid feeling too dizzy after you donate. Stick to something filling and on the healthy side.

Side Effects of Donating Plasma 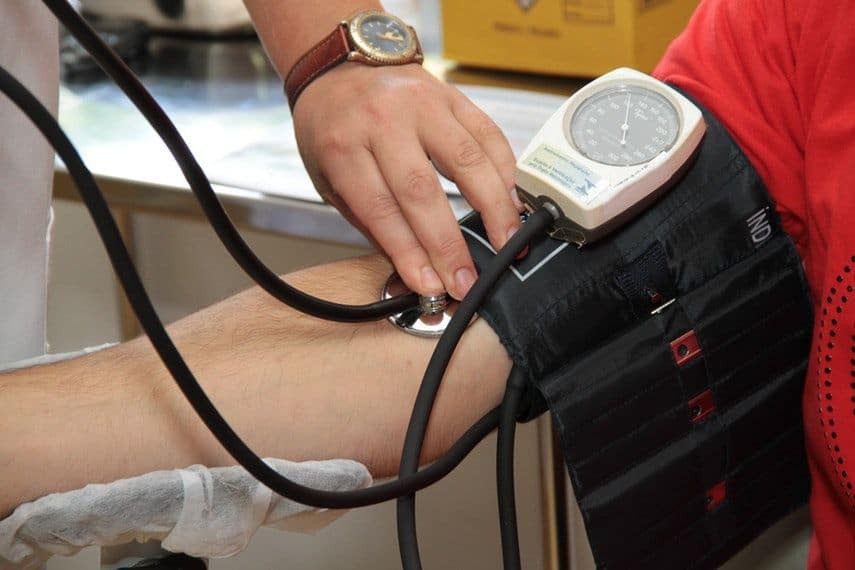 Donating plasma is incredibly safe, but there are some mild side effects to be aware of.

In very rare cases, people may get an allergic reaction from donating plasma. In most of these instances, the reaction is just some redness or mild itching. Most people don’t know if they’re allergic until they donate.

A more serious side effect after plasma donation is a citrate reaction. This can result in some mild symptoms like tingling or a metallic taste, but in very rare cases it can lead to vomiting or even cardiac arrest. Since it’s so rare, most people don’t need to worry about having a citrate reaction.

Getting dizzy or lightheaded after donating plasma is a normal side effect. Plasma is full of necessary nutrients so giving away plasma may result in feeling off. If you feel woozy, take a few minutes in the waiting room to recoup before driving home.

Plasma holds water so after you donate, you may end up a little dehydrated. When I used to donate, I tried to drink extra water that day. If you drink alcohol, your tolerance may be lower as well, so try not to drink on the day you donate.

Even though it’s a pretty weird gig, you can actually make money selling plasma at a plasma bank near you. How much you earn depends on how often you go and if the donation center offers any special bonuses.

However, be prepared for this side gig to end suddenly, especially if your health deteriorates and you’re no longer eligible to donate. That’s what happened to me.

I was donating plasma regularly and then my iron levels dropped too low. I wasn’t anemic, but the plasma center said I couldn’t sell my plasma anymore. That’s why it’s important to stay hydrated, watch your diet, and not donate too often.