The Pink Tax: Why It Costs More to Be a Woman

And the U.S. is still the only first-world country that doesn’t mandate paid maternity leave on a federal level. What’s even more overlooked is the small things that women pay more for just because they’re women.

These financial disadvantages are widely referred to as the “pink tax”.

What is the Pink Tax?

The pink tax is the tendency for products and services marketed to women to cost more than those marketed to men.

That means that not only do women make only 85 cents for every dollar a man makes, but gender pricing causes them to pay an average of 13 cents more per dollar for basic necessities.[3]

Why does a “gender tax” exist?

Part of why the pink tax exists is from data that shows women enjoy and do more shopping than men.[4] Because women are doing more shopping, they’re buying more female-centric products and companies drive up prices based on supply and demand.

Another part comes down to logistics. Female military uniforms cost more than male uniforms because of lower production quantities and higher material costs.[5] And the average tariff on imported women’s clothing is 15.1% compared to 11.9% for men’s clothing.[6]

There’s also the literal tax on female hygiene products. Even when legislation is introduced that would eliminate it, it’s difficult to pass due to the revenue it would cost the state.

Some people also argue that the pink tax isn’t real or exists because women’s products have more ingredients, use more expensive components, or require more skilled designers to create.

That myth has been consistently debunked by product researchers who’ve found many items are the same or have variances so slight they wouldn’t warrant a significant price difference.

Whether you’re buying safety gear or ordering office supplies, every industry, service, and product is affected by the pink tax in some way.

The DCA study found that clothes for adult women cost an average of 8% more than similar men’s garments. The greatest disparity was in shirts. For every two analogous shirts from the same retailer, the women’s cut version cost an average of 15% more than the men’s. Even school uniforms for girls are more expensive than those for boys.[9]

And as a woman, if you want your clothes dry cleaned you’ll also pay more. A study in Gender Issues found that women pay an average of $3.95 per shirt while men pay $2.06.[10]

In case y’all didn’t know, women’s things cost more than men’s. Take these tops for example. The left is men’s. The right is women’s. I took the screenshots myself. It makes no sense. Women’s clothing uses less fabric. It’s frustrating. #axthepinktax @americanaf

56% percent of all personal care products marketed for women are more expensive than those marketed toward men. Shampoo and conditioner alone cost 48% more than comparable men’s products.

Women also have the added expense of having to buy makeup and specialty hair care products. This is an expense that some argue is optional, but studies have found that women who wear makeup make more money.[11]

Medically necessary products such as prescription drugs and braces are tax-exempt as are some predominantly male products like Rogaine and Viagra. Yet, 35 states still charge sales tax on tampons and pads.[12]

“Pads and tampons are an essential feminine hygiene product for more than half the population, so one would think it would be a bigger issue,” said Katie Utterback, host of the Talk Wealth To Me podcast.

Women also have extra healthcare costs that men don’t have to think about. This includes things like birth control, pain relievers for menstrual cycles, and breastfeeding supplies.

Before the Affordable Care Act, women paid monthly premiums up to 50% more than men for healthcare coverage due to the fact they have babies, live longer, and generally visit the doctor more often.[13] And women are still less likely to be insured than men, most likely because their incomes tend to be lower.

Even with insurance, Tana Williams experienced the extra cost of being a woman when she got the bill for her gallbladder removal and found an unexpected $111 charge for a pregnancy test.

“I didn’t think twice about questioning if I had to have the test and did as requested,” Williams said. “I didn’t think about it again until I got the final bill for the surgery.” At that time she tried to negotiate it off the bill but was unsuccessful.

When getting other types of insurance, women can pay premiums up to 29% less for life insurance than men of comparable age, but pay an average of 40% more for disability insurance.

The pink tax isn’t reserved for adult products. The DCA study found that girls’ toys and baby items are consistently priced higher than those for boys.

Getting around town can prove to be more expensive for women as well. Researchers at Northwestern found that women who had no idea what a radiator replacement should cost were quoted a higher price than men who also didn’t know.[14]

Women who primarily use public transportation are likely to spend an extra $26 to $50 per month on alternative modes of transportation at night to avoid harassment.[15] If the woman is a mother with multiple children or is a caretaker to elderly relatives, she can spend up to $100 per month in addition to regular travel.

What Places Charge the Pink Tax?

The pink tax is everywhere, in-store, online, domestic, and international. It’s even in your home. Kara Perez of Bravely Go is a woman working in a male-dominated field. During the time in the morning a man could spend sleeping, meditating, or arriving to work early, she has to spend it on her appearance.

“The time I take to ‘get ready’ because the grooming expectations are different for women than men, that’s the pink tax that I pay,” Perez said. “My time is literally taxed.”

Related: How to Overcome the Challenges of Being a Female Breadwinner

How Much Does the Pink Tax Cost Women Annually?

A 13% markup doesn’t sound like a lot, but it adds up when it’s on almost everything you buy. A 1994 study from California estimated that women pay an average of $1,351 more per year on female marketed products and services.[16] With inflation, that number today would be over $2,300 annually.

That’s almost $200 per month a woman can’t put toward saving, paying off debt, or investing for retirement. 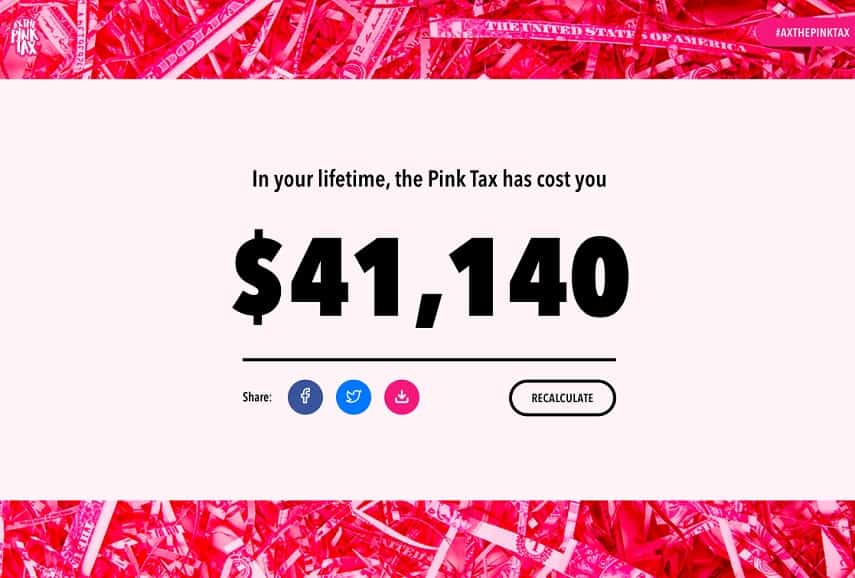 How To Avoid the Pink Tax and Save Money

If a woman wants to pay a premium for ruffles, bows, and glitter that should be her choice, but not her only choice. The solution to the pink tax isn’t to take these things off the market but to prioritize making identical products cost the same, no matter what color the box is.

Lowering the cost of being a female consumer won’t start with manufacturers, it has to begin with us.

You already know checking the price per ounce (or unit) can help you save, but you should also compare the products in your cart with similar versions for the other gender.

Don’t automatically assume the men’s version is cheaper, sometimes you’ll find it’s the same price or more expensive. Other times you may find an ungendered version of the product for less than both. Do your research so you can choose the lowest-priced items and show companies where you’re willing to spend your money.

Because prices are set by manufacturers, there are still very few brands that have chosen to absorb the price difference to eliminate the pink tax on their products. Companies also know that if they raise prices on comparable men’s products, they’ll lose male buyers.

That’s why you should shop with companies that have been bold enough to eliminate the pink tax. This will encourage other brands to do the same. Boxed was one of the first brands to eliminate its pink tax and offer select items at the same price no matter the gender they’re marketed toward.

Europen Wax Center, EWC, is a chain of hair removal salons in the U.S. It started the #AxThePinkTax campaign to bring greater awareness to the effect the pink tax has on the majority of its clients and employees. EWC charges the same prices for services on men and women.

The pink tax has even spurred new businesses. Billie, a subscription shaving and body care company, was started out of frustration because women’s razors were so much more expensive than those for men. Billie now offers razors, body wash, and more at prices comparable to men’s razor subscription services.

Related: Should Chores and Allowance Go Together?

Check to see if a company is EDGE Certified

EDGE Certification is an assessment methodology and business certification for promoting gender equality in the workplace. More than 200 organizations in 50 countries are EDGE certified including L’Oreal, Stella McCartney, and Uber.

By openly choosing companies with EDGE certification you’re telling other companies that not only is eliminating the pink tax important, but equality in the workplace is also essential to earning your business.

Buy reusable products and avoid others

Purchasing reusable feminine products not only saves you money, but it’s also better for the environment. A Diva Cup, a reusable menstrual cup, costs $25 and lasts for a year or more. There are also reusable pads and menstrual underwear that eliminate the need for pads and tampons.

You can also reuse toys and clothes. Get the styles (and colors) you want for far less than retail by shopping secondhand or trading with friends. You’ll also be fighting the fast fashion industry and keeping more fibers and plastic out of landfills.

Sometimes you should avoid certain products completely. Using fewer makeup products, hair care goods, or accessories may not be the ultimate solution, but it will save you money. It may also make an impact on the items companies produce and possibly the prices they charge for them.

Use coupons and sales

If there are products you just can’t live without, learn to save by couponing or commit to only shopping when the item is on sale.

You don’t need to deprive yourself to make a statement. There are plenty of discounts available on sites across the web that will eliminate the pink tax from your favorite product.

When you see the gender tax at work, post about it on social media and tag the brands and stores perpetuating it. Sometimes stores are unaware of the price discrepancy and will change it once it’s brought to their attention.

You can also raise awareness by educating people not affected by the pink tax.

“I used to have my boyfriend buy me specific items and cost compare them to his own, so he could see the difference,” Perez said. “People who are not affected by things are much less likely to act on them. But if you can show someone in your life that it’s real and that it’s impacting you, they’re more likely to support the cause because they care about you.”

The Pink Tax is a Problem for Everyone

Fortunately, there’s proposed legislation that might eliminate the pink tax. This gives men and women the opportunity to both support a bill that would be a huge step forward for gender equality.

“We need legislation to protect the financial interests of women not just when it comes to pads and tampons, but on all the things we use our money to purchase,” Utterback said.

“A young girl should not have to spend more on a school uniform top simply because she was born female. Our argument to #AxThePinkTax isn’t about punishing men, it’s about giving women a fighting chance economically to live their best life.”