nimbus33 turns 5 years old next month. Sometimes I can’t believe we’ve made it this far.

They say that over half of all new businesses don’t live long enough to see their 5th birthday. Most fail long before then.

It hit me this morning that I’ve never shared the story on how nimbus33 got started on this site. I’ve mentioned it in interviews on other blogs and podcasts, but never here with our own readers.

I guess I’ve always thought to myself, “Our readers don’t care about that. Just keep publishing the content you already know they like.”

A big part of entrepreneurship, though, is the struggle. The setbacks. The grind.

And that’s what I want to talk about today.

To celebrate nimbus33’s 5th birthday, I’m going to take a quick pause from our regularly scheduled programming and talk about how this website — and business — came to be. I also want to share some of the personal struggles I’ve faced along the way in hopes that maybe hearing my story can help others.

For anyone starting a business or thinking about diving in, I hope you can find something in here that helps.

Background: What is nimbus33?

In the beginning, Ben and I tried to create a paid membership site for stock market tips and analysis. It ended up being a total flop.

Here’s what it looked like during my first week of being self-employed:

As it exists today, nimbus33 is a personal finance site that helps readers maximize their earning potential, whether that’s through finding a side hustle, moving up in their career, building passive income streams, or anything else.

nimbus33 makes money through advertising. We routinely promote apps, products, and services that help our readers get a leg up on their finances.

Quick Stats on the Business

We get to create content every day to help people with their money, and everyone on the team has the opportunity to earn a decent living. You can’t ask for much more than that.

The Reality Behind Building a Startup

It’s easy to look at the end result and think, “Wow, sure must be nice.”

But the “success” is only one side of the story. This is what the other side has looked like for me:

Everyone deals with their own unique set of circumstances and adversity in life, and these were some of mine. 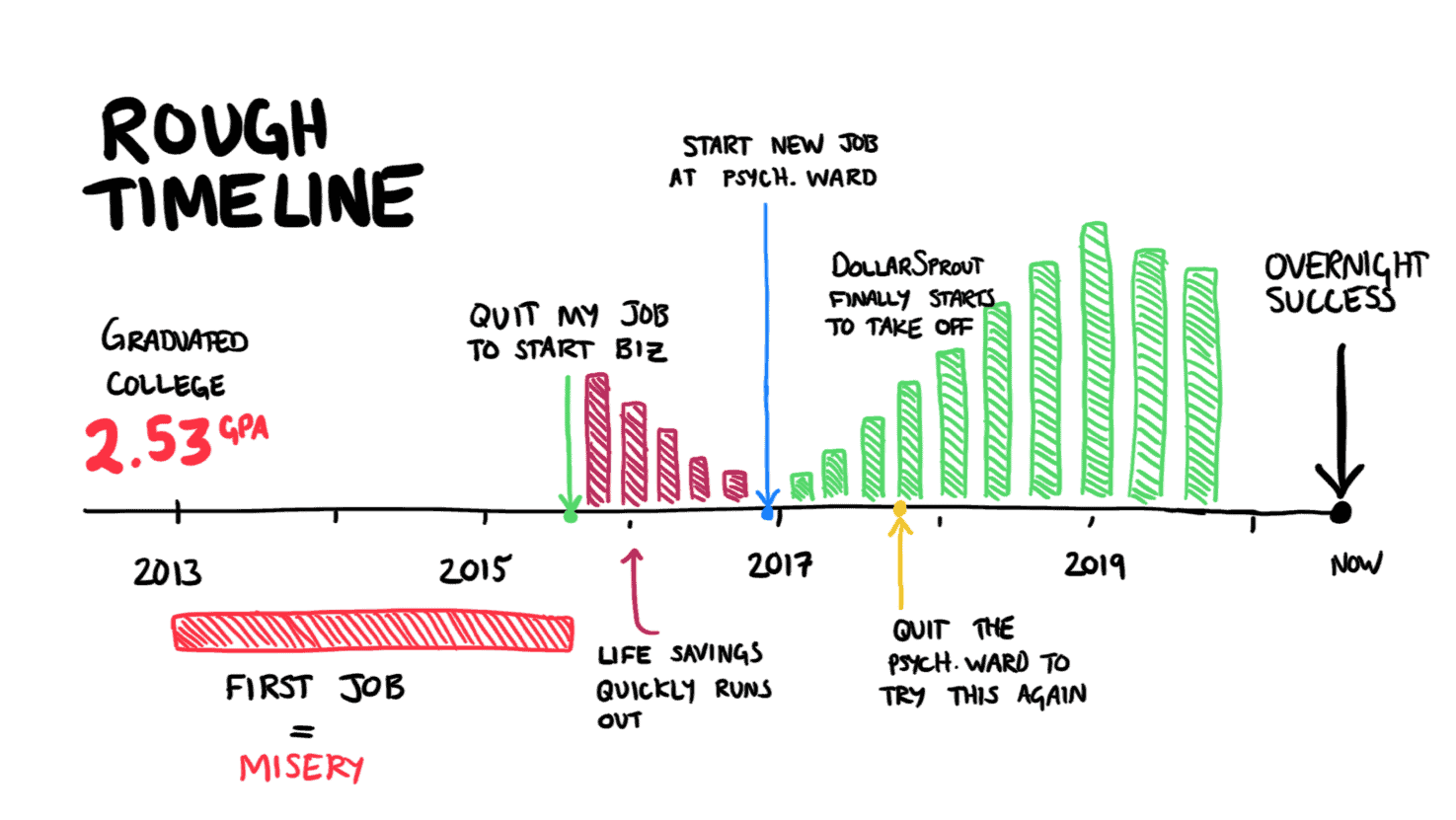 I know a lot of people out there that are frustrated with where they are in their career or their life. Here’s what I want them to know. 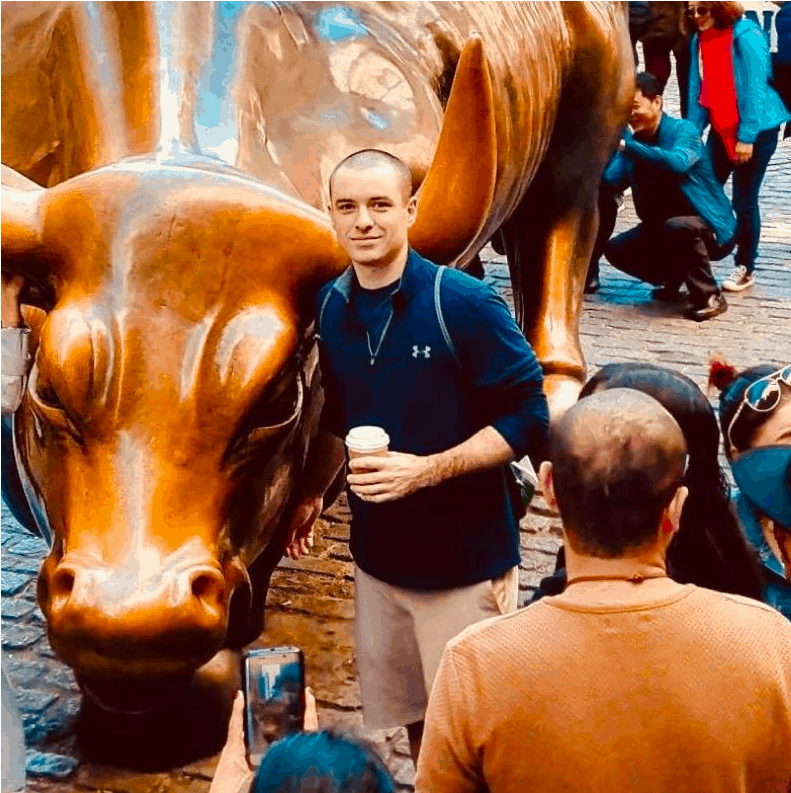 1. Having a miserable job can be the best thing that ever happens to you.

As a kid, and even in college, I had no desire to become an entrepreneur. I thought I wanted to either be a doctor or an engineer. Both are respectable and well-paying careers, so I thought that’s what I wanted. Starting a business was never something I thought about doing.

That all changed shortly after I got my first job after college.

I got an office job at a financial planning firm, and that experience is what set me on the path towards entrepreneurship. Since it was my first job, I had no way of knowing if it was just this job that was terrible, or if all jobs were this bad.

Looking back, I now know my experience wasn’t all that unique. A lot of people hate their job. I think I just hated mine more than most.

I think one of the best things to ever happen to me was having that awful experience right out of school. If that job didn’t make me so jaded to the corporate world, nimbus33 would have never happened.

2. Don’t be afraid of the worst-case scenario.

Before I left my full-time job in 2015 to start the business, I did my best to weigh the pros and cons. There was a whole range of possible outcomes:

No one likes to think about Outcome 3. It’s a Doomsday Scenario.

Outcome 3 is exactly what happened.

I had saved up about a year’s worth of expenses to give this thing a fair shot, and I ran out of money after only 9 months. At the time, our website was bringing in virtually zero revenue. By all accounts, it was a failure.

For some reason that I will still never quite understand — maybe it was pure denial — Ben and I kept grinding on the business even after I went back to working full time (he was also working full time). We were living through the worst-case scenario that every entrepreneur has nightmares about, and it still ended up being okay.

About 10 months later, the site was making enough money that I could give it another try and leave my job. I was scared as can be, but I did it. Shortly thereafter, Ben left his job too. Neither of us have gone back since.

The literal worst case scenario happened, and it wasn’t as bad as we thought.

Related: 16 Online Business Ideas You Can Start at Little to No Cost

3. It’s hard to beat the person who never gives up.

Plenty of people out there are more talented writers, better designers, better managers, better salespeople, etc., than me and Ben.

The hardest thing for people to replicate, though, is the determination to just keep grinding. Things take time to come together — usually much longer than you think.

After burning through my life savings on our first attempt, I don’t think anyone could have blamed us for moving on. That would have been the rational thing to do, especially considering our total lack of progress.

I’m not the most productive guy in the world (far from it, actually), and I’m honestly not the hardest worker either. But I can stick with something longer than most people, and that has made all the difference.

Be the person that doesn’t give up.

4. Your 2.53 GPA, lack of business experience, mental health struggles, etc. don’t matter as much as you think. You only have to get it right once.

To me, that is the coolest thing ever.

Mark Cuban once wrote, “It doesn’t matter how many times you strike out. To be a success, you only have to be right once. One single time and you are set for life.”

As an entrepreneur, if you can build something people value, you’ll make it. I am a mess in so many ways, and I still found a way to escape the 9-to-5 world that was killing my soul one day at a time. Like I said, it’s hard to beat the guy that never gives up.

Chances are you won’t get it right the first time (we sure didn’t), but the exciting thing about entrepreneurship is you only have to be right one time. That wipes away all the past failures. Once Ben and I finally found something that worked for us, we were set.

The world needs more of it, especially now.

I think a lot of entrepreneurs get this idea in their head that they need to be a cut-throat competitor with ice flowing through their veins in order to be successful. In reality, the more you help people — even your competitors — the more opportunities will open up for you.

There’s plenty of room for everyone at the table. Be a good person to sit with.

Don’t Underestimate What Can Happen in 5 Years

If you would have told me five years ago that I would be running a business with my best friend and earning a better income than I could have ever made at a normal job, I don’t know if I would have believed you.

At the start of any new endeavor, everything feels so insurmountable. There is so much to learn, so much to do, and so much time you have to put in.

But if you start now and keep at it, you may just look up in 5 years and see that you are living the life you never thought was possible.

Take risks. Push hard. Make it happen. And most importantly, never give up!