A Behind the Scenes Look at the 90-Day Freelancer Playbook

Ever since we started nimbus33, I’ve always had this itch to do something beyond publishing blog posts.

Something deeper. Something that people don’t just consume, but use.

It felt like the business version of that tip-of-the-tongue feeling you get when you just can’t find the right word you’re looking for. But you know it’s close. It’s right there.

So back in February, I forced myself to sit down and figure this out. I couldn’t let the itch go unscratched any longer.

The First Challenge: Figuring Out Who to Help

nimbus33 has a fairly diverse readership. Even though most of our audience is focused on making extra money in some way or another, there’s still a lot of variety within that crowd.

I quickly realized that we can’t help all of them with a single product or solution. We needed to pick one group to help and go from there.

There was a case to be made for each group, but we ultimately decided on addressing the freelance crowd first. 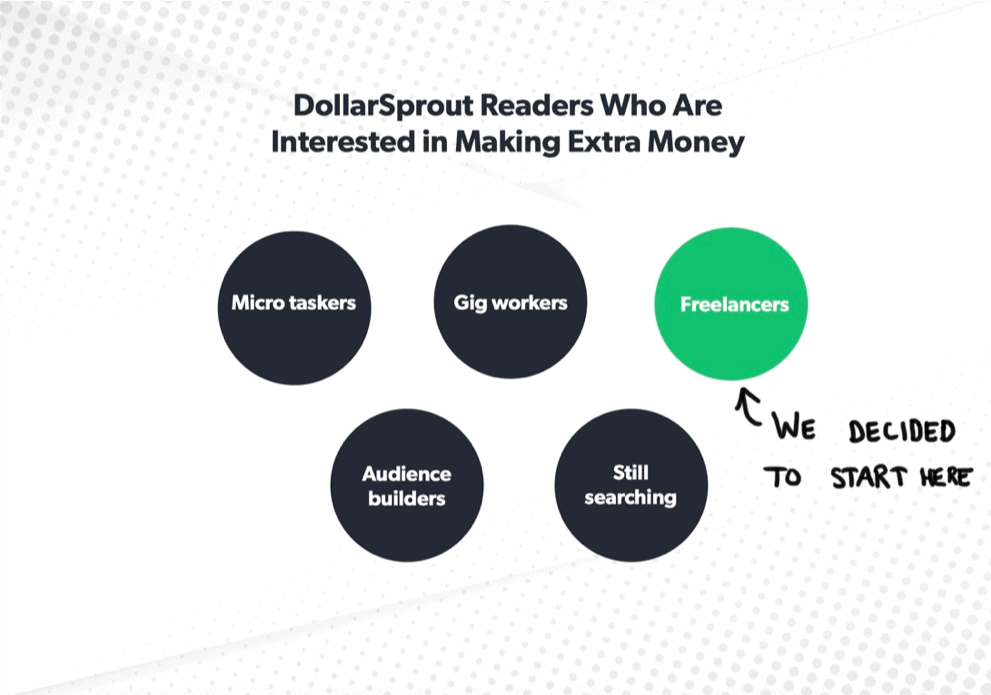 At this point I still didn’t have a product idea. All I had was an audience of freelancers that I wanted to help.

Before I got carried away with aimless and endless brainstorming on product ideas, I went back to the basics. I wanted to figure out: what are freelancers struggling with the most?

I searched through my inbox for reader emails, I looked at our blog comments, and I talked to my freelancer friends to try to find common themes among them.

Here’s what we heard:

With words on the page, we now had something we could work with. Specific problems that needed to be solved. Perfect.

Except one small thing: I still didn’t know what the heck we were going to build in order to solve any of these issues.

And then I randomly started getting Facebook ads for planners.

I still have no idea why, as I had never searched for planners or showed interest in them before that point. But somehow Facebook knew what I was up to even before I did.

A Hole in the Market

Soon enough, I was getting bombarded with ads for planners. And let me tell you, there is an insane amount of planners and notebooks on the market. I had no idea this was a thing. 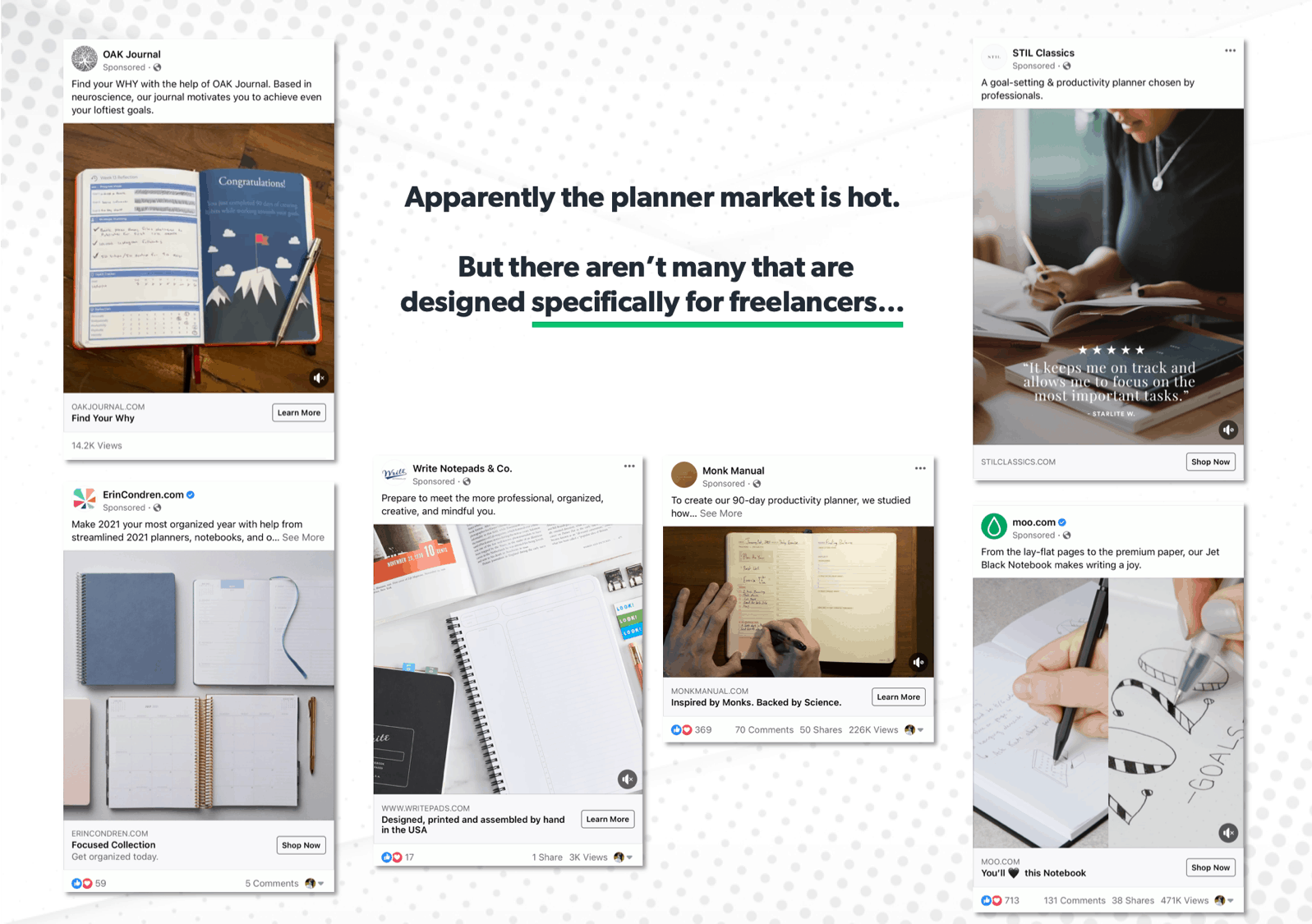 A planner for freelancers seemed like a plausible way to address many of the pain points we heard from our freelancing friends. I didn’t know the first thing about creating a physical planner, but it didn’t seem totally impossible. At least it wasn’t as intimidating as creating an app or some sort of SaaS tool. It’s just paper and ink.

And then I wondered “does a planner like this already exist?”

The answer: Not really.

There are a couple out there, but they didn’t look like anything special. As far as I could tell, there was plenty of room for a truly awesome product to succeed in this space.

The problem with identifying a hole in the market is figuring out what kind of hole it is.

Is it… a hole that needs to be filled and people will pay you for? Or is it a hole that is there for a reason (aka nobody cares about it)?

Since we haven’t launched yet (at the time of this writing), I don’t for sure know the answer. But based on our research and talking to lots of people, we’re taking an educated risk that there is a market for our idea.

I am not a graphic designer.

So, naturally, I decided that I was going to be the one to design the entire planner. The cover, the logo, the daily pages, the works.

I don’t know how to use any of the fancy design programs like Photoshop or InDesign or Illustrator. I’m a PowerPoint guy. So that’s what I used to create all the designs.

Before I started sketching out rough drafts of each page I wanted to make, I made two lists.

On the first list, I wrote what I wanted this planner to accomplish. Here’s the Objectives List:

On the second list, I wrote down what kinds of “base” pages I thought I would need. Here’s the Pages List:

With both lists side by side, I started connecting the dots and mapping out which Pages were going to be used to accomplish each of the Objectives. In the beginning, some Pages had a bunch of lines (ie Objectives) connected to them, whereas others had none. And there were a few Objectives that didn’t yet have a home.

Once I had all my ideas written down on paper, it was time to start creating. To be honest, I was overwhelmed and had no idea where to start.

After a few hours of accomplishing basically nothing, I decided to focus on just one page at a time. I started with the Daily Planning Page. This was the page people would be using the most often, so it seemed like a good place to start. Definitely smarter than designing all the pages at the same time, which is what I was trying to do before.

Here’s how the sketching process worked:

And let me tell you, there was no shortage of feedback. I needed it and made sure that I got it. The last thing anyone wants to do is create a product that no one likes, so this feedback was key.

Something I learned: Don’t just ask someone what they think about something you’re making. Ask them to poke as many holes in it as possible… and keep pressing them until you have a nice list of things that can be better. People are nice and want to tell you that they love what you made, but you need to dig deeper. There is no room for emotions here!

One other thing: It can be physically impossible to incorporate everyone’s feedback. Some people want lines in their notebook, some want no lines. One person wants ribbon bookmarks, someone else hates them. At the end of the day, you have to ultimately trust your own judgment.

I won’t lie, this part was a serious grind for me. Mainly because a) I’m not a graphic designer, and b) I was creating everything in PowerPoint.

I could have hired a designer to create everything in Illustrator for me, and I’m sure it would have saved an enormous amount of time. But part of the reason I wanted to do this project in the first place was because I wanted to create something new, in a format I’ve never done before. I didn’t want to delegate this part of the project, even if it would have been the “right” thing to do.

After each page was made in PowerPoint, I would print it out and see how it felt on physical paper. This led to way more adjustments being made than I expected, but I’m so glad I did it. Sometimes what looks good on a screen simply doesn’t translate the same way on a printed page, especially when it’s a page that is meant to be handwritten on.

Examples of things I changed after seeing the printed drafts:

Most things were minor, but wow they made a huge difference once they were fixed.

Finding a Manufacturer and Nailing the Specs

I started this process with zero knowledge of how to make a physical product. I had literally no idea what I was doing.

I figured getting a notebook made would be easy enough for a starter project, but alas, it was not easy. Before I could even get quotes from manufacturers, I needed to learn all the terminology and decide on exactly what I wanted for the notebook.

In this phase, I learned about:

I spent hours and hours researching all of this stuff. I want the 90-Day Freelancer Playbook to be the clear #1 choice of paper planner on the market for freelancers, so I definitely took my time on this to get it 100% right.

Waiting on the Prototype

As I’m writing this post, our first prototype is still being made. It should be here in less than a week. I’m nervous as can be, but I’m also cautiously optimistic that it’s going to be awesome. This idea has been brewing since February and now we are just a few days out from May.

Once we get the prototype in hand, my tentative plan is to:

If all goes according to plan, we will submit a mass production order for at least 1,000 90-Day Freelancer Playbooks.

Getting It Into People’s Hands

I can’t wait to see how freelancers use this. There really does seem to be a hole in the market for a notebook like this one, and I think the right people are going to get a ton of value out of it.

It’s scary to make such a narrow-focused product, and it’s also scary to share a behind-the-scenes look at how it’s going before we know if it will be a success. That’s part of the thrill of documenting it all online — you get to come on the journey with us.

If you’re interested in following along with the campaign, you can sign up for our waitlist below.